The Changing Dynamics of the Oil & Gas Industry

Since its discovery, petroleum has played a prominent role in the growth of the world economy and in the quality of life of societies around the world. It will continue to do so in the future. The world has changed considerably over the last century and the pace of change will continue to accelerate into the future as the world population grows.

Looking ahead to 2030 or 2050, how will the Oil & Gas industry evolve and what might be the consequences for the key stakeholders? What impact will the CoVid-19 pandemic have on energy consumption in the future?

Let’s look at some of the key trends and issues facing the industry.

The four mega trends below will greatly influence the O&G Industry:

1. Demographics
It is forecast that, on its current trajectory, the world population will grow from over 6bn today to 8bn by 2030 and will reach 9bn in 2050, with most of the population growth occurring in the developing world. This is coupled with an ageing population in the developed world and relatively young population in the developing countries.
2. Globalisation and differential GDP growth between developing and developed world
This will create a greater demand pull for resources to the developing world coupled with a shift in the geo-political landscape. GDP per capita is forecast to triple by 2030 in China and India, which will bring their 2.5bn population much higher up the energy ladder.
3. Energy Consumption
If current trends continue, energy demand will double by 2050. By 2030 energy demand is expected to rise by 40% to 16.6 billion tonnes of oil equivalent per year. Over 95% of the increased demand is from non-OECD countries, mainly China and India.
4. Climate Change and Sustainability
Greater demand for energy will lead to more pollution problems and force society to look for “earth friendly” solutions to greenhouse gases (carbon dioxide—CO2) and other pollutants.

But what impact will the CoVid-19 crisis have on our future behaviours and energy consumption?

Globally today, about 90% of the energy supply comes from fossil fuels and 10% is nuclear.

Fossil fuels will continue to play an important role, but with rising levels of CO2—for which there are no easy or cheap answers—the world will have to look for alternative sources of energy, technological solutions and more efficient ways to produce and use energy.

Even if we assume that fossil fuels will provide around 60% of global energy in 2050, oil and gas will still be important source of energy. Furthermore, if the past was about coal and oil, the future will be increasingly about gas. It is abundant from conventional sources and from large finds of shale gas as well. It is also a clean source of energy, given that it does not produce CO2 as a by-product. Oil will continue to dominate as a transportation fuel but the demand for bio-fuels as part of the mix will increase.

However, the new finds are increasingly in remote geographies and difficult environments, such as deep under water or from unconventional sources like shale oil and shale gas. In short, there is an adequate supply of O&G for future needs, but the new projects will be larger, more remote and complex and enabled by innovations and advances in technology. The associated risks are also higher. Consequently, the nature of programme management is changing, becoming more complex, involving new partnerships, sharing risks, managing operational risks, etc.

The USA is the single largest consumer of oil and consequently an importer of oil and gas products. However, this picture has dramatically changed during the last three to five years due to the recovery of shale oil and gas brought about by new technologies: horizontal drilling and hydraulic fracturing (“fracking”). It is now forecast that the USA will become self-sufficient by 2020, eliminating its reliance on OPEC supplies. Furthermore, the availability of cheap gas in the USA will revolutionize the industries which depend on it: chemicals, agriculture and pharmaceuticals.

In contrast, China and India, which are not rich in indigenous oil and gas, will require larger imports to sustain their growth rates. This means that OPEC supplies will increasingly be directed to the East.

The geo-political landscape will change as a result.
Greater Role of China and India on the O&G Landscape
National oil companies (NOCs) from both China and India are beginning to acquire oil and gas resources around the world. They are ambitious and clearly want control over the resources rather than merely depend on buying oil and gas on open markets. This trend will accelerate. NOCs from MENA and Eastern Europe/Asia will form complex partnerships/relationships with India and China.

Technology and Innovation Continue to be the Key Enablers

Throughout history, technology advancements in the upstream oil and gas business have opened up new frontiers (e.g., Seismic 3D), enabled safer operations, enhanced oil and gas recovery from existing fields and increased energy efficiency. In the downstream business (e.g., refining and marketing), technology has increased and upgraded the capacity of the oil barrel and has met the increasing demands of environmental legislation.

Following Exxon Valdez, Shell Brent Spar, and more recently BP’s Gulf of Mexico incidents, the public has been left scared. The world is now much more critical of the oil industry. 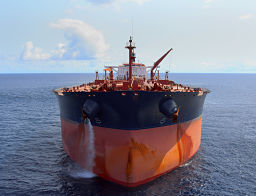 The oil industry has been reporting societal performance for sometime but the demands will increase even more. Greater consultation and approval with myriad stakeholders on new complex projects will become a standard pre-requisite process. Projects will have to be shown to be transparent and accountable on employee rights, to include environmental protection and community relations, etc. Even when NOCs are leading development in their own backyards, their international partners will demand this to protect their own reputations. Regulatory frameworks and licences to operate will be increasingly more stringent and demanding.

The early evolution of the oil industry was shaped by the international oil companies (IOCs) or super-majors who led discoveries and introduced new technologies. Towards the end of the last century, NOCs such as KPC and Saudi Aramco started to become prominent. Today, these established NOCs are also developing their own technologies, as exemplified by Saudi Aramco’s expertise in enhanced oil recovery, Petrobras’s deep-water knowhow, etc.

At the same time, international oilfield services companies (IOSCs) like Schlumberger and Halliburton have increased the “bandwidth” of services they provide and have also become important players. Looking ahead, with the emergence of Chinese and Indian oil companies that want to buy assets or have direct control of larger and more complex projects in difficult geographies, the roles and relationships of the different parties will also change. As a result, the financing and risk-sharing models for new discoveries will change.

Impact of These Changes on Oil & Gas Companies and Their People

In this fast-changing and complex world, to be successful, managers need to be agile, versatile and willing to adapt rapidly to changes. Many business people in Oil and Gas Industries have technical or engineering backgrounds, and it is important to get good business skills quickly to complement their technical knowledge.

MCE works with Oil & Gas companies throughout EMEA to develop their employees to become “all-round” managers.

To succeed as a manager, you need to have a solid understanding of all parts of the business. You need to know how each part and level in the organization interacts with each other and contributes to corporate success. It is no longer enough to just work effectively on your own; you also must work exceedingly well across the company.

So, how can you get this understanding and experience faster if you have a scientific, engineering, technical or specialist background? What tools do you need to understand what is driving your strategy? How can you align your contribution consistently to the organization’s strategy? How do you balance short term vs. long term when things are changing so quickly and so dramatically?

This Oil and Gas Management Course will help you address those challenges.

Are you ready for the challenge?

InCompany Solutions for the Oil & Gas Industries: 3 Ways to Develop your People

Sometimes “standard” programmes are not what you need for you and your teams. Your company might have specific competences you need to develop or you need to customize a programme that focuses on your companies specific challenges. Then the ideal solution for your company is a Customized Learning Solution.

6 Step Approach to your Customized Training 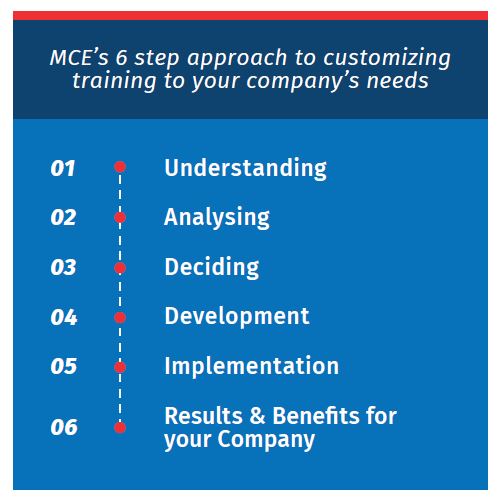 To find about more about the 6 step approach, please click here.

Some Recent Customized Solutions include:

The current crisis is very challenging for everyone – in both our private and business lives. Many employees are working remotely and trying their best to adapt to the new realities and keep focused. But, they need support.

They need new skills to cope with the new challenges, but they also need to develop a lot of fundamental business skills, as they multi-task and cover more business areas than ever before.

You can now organize any MCE Live Online Programme for your company or organization (up to 20 participants)  for only €5000 per programme. Live Online programmes are delivered by an expert MCE Associate. 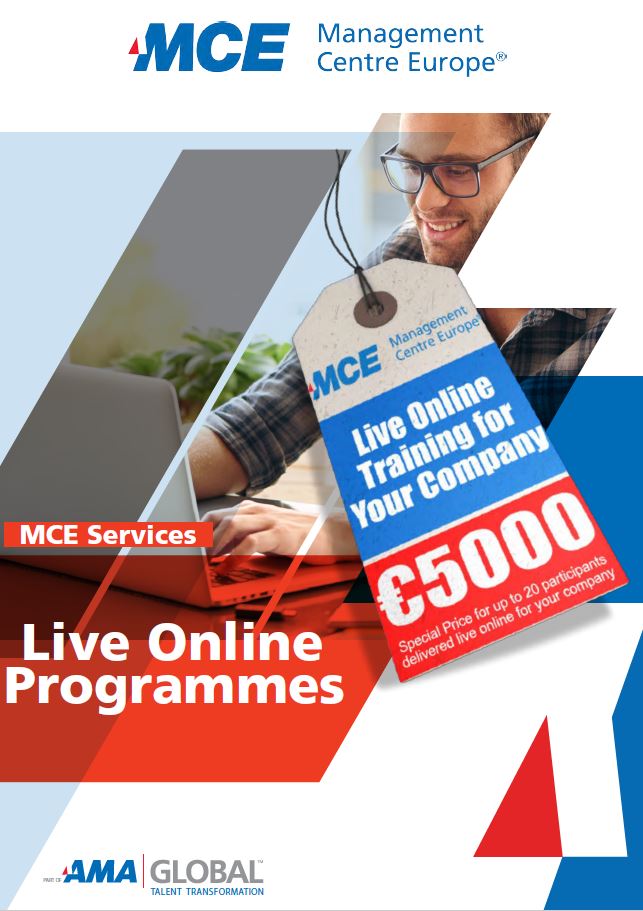 It is a VUCA world. There are many changes and things are uncertain. Companies and organizations are tightening budgets. It can be difficult to develop and train your managers. However, your managers need the right skills and behaviours to get the results that your company needs.

Stephane brings to MCE more than 30 years of leadership experience in the natural resource extraction and product manufacturing industries with exposure to joint-ventures, affiliate management, large operations and projects. He covered a broad line management scope, including Managing Director and Lead Country Manager. By combining his sound management experience with a pragmatic approach, he successfully delivered complex operations & project execution, restructuring, divestments, contract negotiations. He headed teams of up to 1,500 people in 6 countries for a major global oil & gas corporation, as well as in world-scale petrochemical manufacturing sites.

Andreas gathered experience both in academics (about 5 years) as well as in business where he occupied various positions during his 10 years in the manufacturing industry and more than 12 years in the oil & gas industry. He developed international management and leadership skills due to the footprint of the companies he has been working with. Throughout his career he has initiated and successfully completed projects mainly related to strategy development & implementation, value management & capital cost, organization & shares services, performance (management, enhancements, rewards), steering (planning, budgeting, management KPIs), M&A and capital markets. He has also been in charge for Internal Audit, Compliance and Procurement. Andreas mainly occupied financial leadership roles but has also taken overall business responsibility.

The MCE Team is there for you.

Performance cookies are used to understand and analyze the key performance indexes of the website which helps in delivering a better user experience for the visitors.

Analytical cookies are used to understand how visitors interact with the website. These cookies help provide information on metrics the number of visitors, bounce rate, traffic source, etc.

Advertisement cookies are used to provide visitors with relevant ads and marketing campaigns. These cookies track visitors across websites and collect information to provide customized ads.